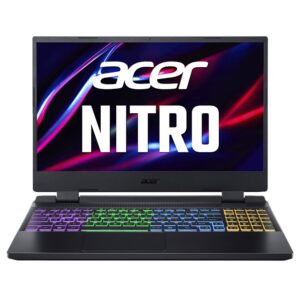 Acer has finally launched its latest series of Nitro 5 lineups in the market, with a ton of upgrades. Even though Acer has marketed the nitro 5 series as a casual gamer’s laptop for many years, this time it feels like the deal is real. Packed with the latest high-performance chipset to blazing high refresh rate screen, it’s here to conquer the mind and hearts of gamers and professionals alike.

Acer Nitro 5 consists of a full plastic body. There is some flex on the lid and the keyboard while pressing, but overall it’s sturdy build quality. As always there are gamer vibes all over the laptop, so if you are into minimalistic stuff then better look elsewhere. It’s also quite thick from the side, as expected from a budget gaming laptop. Some might mistake the air inlet on the top of the keyboard for speakers. It’s a part of Nitro 5’s cooling mechanism. Coming at around 2.6kg it’s not something one would like to carry as a travel companion.

It’s great to see the inclusion of Thunderbolt 4, although that’s only limited to intel models. We’re pretty sure it’ll be more than enough for most individuals unless one wants to run a huge production studio with it.

It also comes with the latest connectivity. The Intel® Killer E2600 Ethernet Controller, Intel® Killer™ Wi-Fi 6 AX1650i along with a Killer control centre to control all of these a great addition to the lineup.

Trackpad– The trackpad on the Acer Nitro 5 is Big and quite mediocre to be exact. Nothing sort of extraordinary or too underwhelming as well. As with all the latest laptops, it doesn’t come with dedicated buttons as well. Rather the whole trackpad acts as a button, depending on where you click.

Webcam– Webcam is quite decent considering all the other gaming laptops at this price point, or gaming laptops to be exact. The in-built sound recorder is quite good as well. There’ll be no problem while on video conferencing or meetings as well. If you just like clicking selfies, then maybe try using a phone.

Acer has gone up a notch and is offering great displays in this lineup. It comes with two options either 15.6 or 17.3, with up to 2560 x 1440 QHD display and up to 165Hz refresh rate. Acer also claims up to 3ms response time. Max brightness is at 250 nits with 45 % NTSC and 62% sRGB.  165Hz at QHD is going to be overkill for most games unless it’s some competitive shooter or some similar game.

17.3 inches is a sweet surprise induction to the lineup, specifically for gamers who like to game on big monitors but don’t want an external monitor.

Acer Nitro 5 comes with both AMD as well as Intel versions. But in India, they offer only the Indian version. i5-12500H and i7-12700H are the two variants currently being offered by Acer. The 12th gen Intel chips have 2 more cores than their 11th-generation counterparts with topping at almost 14 cores in the i7 variant, so it’s great for multitasking as well.

Acer’s also offering up to RTX 3050Ti on these models as well. With the new 30-series graphics card and Nvidia’s Ampere architecture, it’s better than ever to be alive as a gaming enthusiast. Ray-traced realistic graphics as well as Nvidia DLSS is a major game changer in modern-day gaming. Even though these Max-Q mobile cards are more low-powered than their desktop counterparts, these don’t trail in performance that much.

Games like Call of Duty Warzone and the Spiderman Remastered will run smoothly on this machine with amazing graphics and refresh rate as well.

The dual fan cooling system along with a newly designed cooling system does a good job but one has to monitor the temperatures in intervals to prevent thermal throttling and overheating. The nitrosense app does a great job at controlling the rotation speed of fans manually as well.

In India Acer Nitro 5 comes in two variants i.e., 1 TB HDD with 512 GB SSD and only 512GB SSD. It is to note that the SSDs are M.2 NVMe SSD. When it comes to RAM it also comes with two variants i.e., 8 GB DDR4 and 16 GB DDR4 SDRAM.One can easily expand either of these if one wants more memory.

The gaming laptop features dual two watts, speakers, on either side of the laptop. It also comes with DTS:X ultra built in for better sound in games( it’s what Acer claims). Although in our case it sounded like any other gaming laptop at this price point i.e., mediocre. Also during intense gaming sessions, fans blow up at full speed so one must wanna use dedicated headphones for better audibility.

With normal usage at 50% brightness, the laptop lasts for about 3 to 4 hours. It’s what we expected considering it’s a budget gaming laptop. It’s recommended that while gaming one should put on the chargers for better performance. Otherwise, gaming on battery will hardly last for an hour.

It does feature a MUX switch which will enable one to switch to dedicated graphics while on battery for gaming instead of integrated graphics. While it’s certainly not the best in the battery department we don’t recommend it taking it as a travel companion

Just like its predecessor this laptop is very much upgradable. It has a place for two SSDs and a hard drive along with two slots for RAM. It supports up to 2TB  SSD Gen 4 in RAID 0 configuration and up to 32 GB of DDR4 3200MHz RAM.

For more on the new Macbook Pro click here… 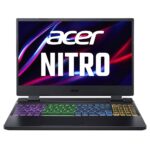