Asus ROG line-up has been a hit from a long time now. The Taiwan giant doesn’t fear to experiment and with the recent launches of their laptops, it is quite evident. The recent addition of The Asus ROG Flow Z13 shows Asus being brave enough to launch a 1 lakh+ gaming tablet. Is it a really 13.4 inched tablet, let’s explore. 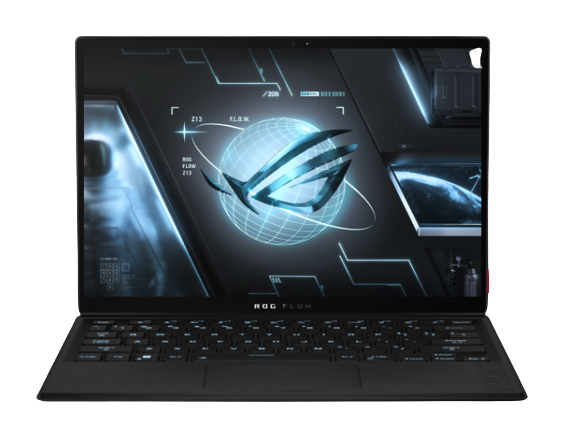 The 13.4” ROG Machine feels solid. Weighing at around 1.18 kilos, it is light to hold, but holding it with one hand and using from the other doesn’t feel natural. That said, the 12mm thick tablet does feel grounded with the kickstand embedded into the machine. The kickstand can adjust up to 170 degrees. Overall, this is not a device to be used as a tablet, rather a hybrid of laptop and tablet.

The Already powerful internals can be further boosted using the ROG XG Mobile Interface. It can enhance the graphics and increase support for multiple inputs.

For a device of such size, having a good port selectivity is a boon.

Keyboard – The external keyboard has fairly decent travel. It is RGB backlight which makes it feel more gamer centric. The chicklet type does not trouble much and even after extended usage, does not pain the hand. It has a weight of 340 grams, so if used with main tablet, adds up this amount of weight.

Touchpad -Of course accommodating a keyboard with a trackpad in the tiny form factor is not easy, but Asus has tried to maximize the space for increased usability. Yet, one doesn’t game with a trackpad and an external mouse is recommended.

Webcam – It has 2 of them, one on the back, an 8-megapixel shooter while a 720p one on the front. While no one is going to use this device as a “Camera” tablet, yet the addition is sweet.

The Asus ROG Flow Z13 comes in two display variants changing according with the processors. The lower i5 and i7 variants sport a Full HD 120 Hz smooth display while the top end model, 4K resolution, comes with only 60 Hz of refresh rate. The touch screen panel supports stylus, which is provided inside the box. We Have the top-end i9 model with us and in our testing, we found it to be real crisp panel. It produces beautiful colours and Glossy panel doesn’t smudge that easy with fingers all over it.

The 13.4-inch 16:10 IPS display is Pantone Validated and supports Adaptive Sync with Dolby Vision HDR. Overall, we would have liked a higher refresh rate panel, but presence of Stylus and Ultra HD resolution helps.

As mentioned previously, the Asus ROG Flow Z13 comes in 3 variants, namely i5, i7 and i9 12th generation. The i9 model we have with us has a 12th Gen Intel® Core™ i9-12900H Processor 2.5 GHz (24M Cache, up to 5.0 GHz) having 14 cores, 6 Performance-cores and 8 Efficient-cores. On the performance front, the tablet performs beautifully. The new Silicons are powerful and the thermals are also kept in check. That is largely due to presence of vapour chamber paired with liquid metal.

Being a ROG, this machine is focused at gaming. This is clearly evident from the fact that the tablet has a NVIDIA® GeForce RTX™ 3050 Ti Laptop GPU. The i7 supports the vanilla 3050, while the i5 supports none. Light to medium gaming again is a breeze on this device. Targeted as a Gaming Tablet, this device does not perform as one might expect. The 3050 Ti is not powerful enough to get the AAA titles run smooth. In games like Metro Exodus, it barely touched 30 fps and with all the settings changed to low graphics mode, it tries to touch 60 fps. That said, this is strictly not for heavy gamers. The asking price of the laptop is enough to make someone feel that they are not getting the maximum performance out of the tablet. A ROG performing this bad is not what one expects.

The ROG XG Mobile Interface does help a lot. The performance is significantly smoother as the maximum you can opt for is a 3080. That GPU is miles better than the 3050 Ti. Yet after paying this amount of money, one doesn’t expect the device to perform bad.

This laptop is powered by a 56 Wh, 4-Cell battery which seems decent for a tablet. It can actually last around 8 hours under normal workloads. This equipped with XG Mobile Interface and gaming simultaneously will require continuous supply. Asus has bundled a 100W of fast charger with this device. This can charge the battery real quick. 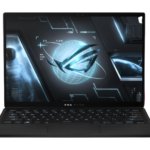