Asus’ TUF Lineup consists of entry level gaming laptops which usually provide the best bang-for-the-buck configurations. The current FX505 series replaces the older 505 series with the most visible difference between them being that the older series only had red keyboard backlighting while the newer series has customizable RGB backlighting. The laptop in review here is the FX505DU. The ‘D’ in the model name suggests that it has an AMD processor, with Intel ones bearing the ‘G’ moniker while the ‘U’ suggests that it has an Nvidia Geforce GTX 1660 Ti GPU with the ‘T’ model having a GTX 1650, the ‘T’ model having a GTX 1650 and the ‘V’ model having an RTX 2060.

This laptop comes in two processor variants and many storage options. The one in consideration has a Ryzen 7 3750H processor and a 512GB NVMe SSD. 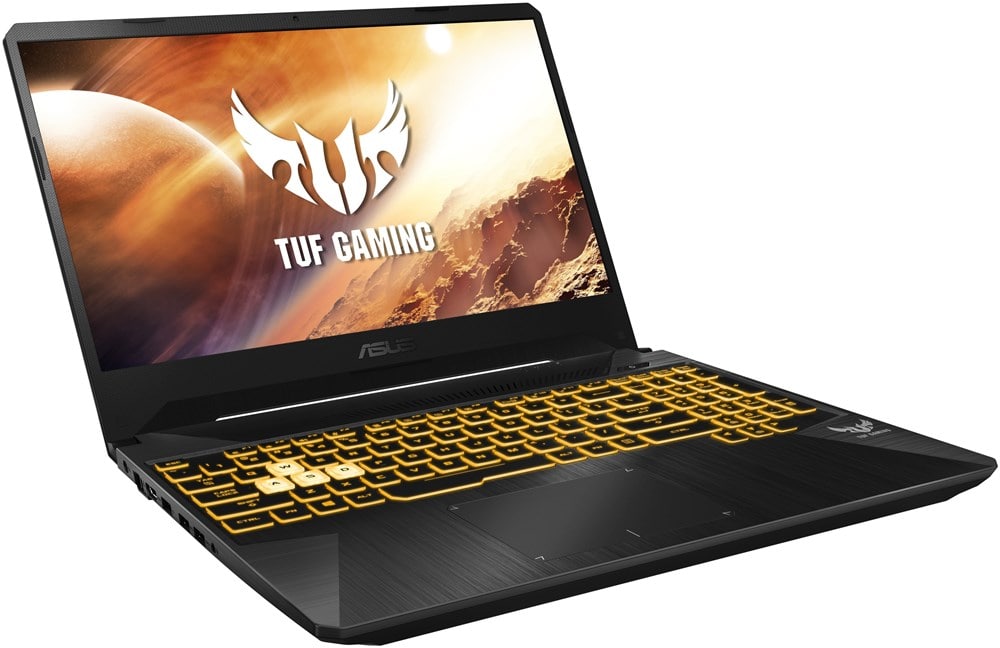 On the first look, one can easily spot the Asus TUF FX505DU to be a gaming laptop. It has a radiating X design on the lid, cut corners which look edgy and gamery and the heatsinks are red in colour. It is not as flashy as, say the ROG lineup, but it is still a long-shot from being mistaken for an office laptop.

The build is all plastic with the lid having a brushed aluminium finish to it. Build-wise the laptop does leave things to be desired. The lid can be flexed quite a bit while the hinges don’t feel that strong either. The display has narrow bezels, which is a good thing to see in such a budget device, though it is becoming more and more common in 2020. The chin bezel is still kinda thick but at least the webcam is not a “nosecam” and is placed on top of the display.

The laptop weighs in at 2.2kgs, typical of a 15 inch gaming laptop,  while the narrow bezels help reduce its size footprint by a bit.

The FX505DU has an unconventional I/O arrangement, all the ports are to the left of the laptop while the right side only has a Kensington lock slot. While this can be good for right handed gamers who can use the extra room on the right for their mouse, things can get a bit too congested if you are using most of your ports. It would have been a better idea to keep some of the ports to the back like in the ROG lineup laptops. On the left there is the AC power jack, Gigabit RJ-45, HDMI 2.0, USB 2.0 Type-A, 2x USB Type-A 3.1 Gen. 1 and a 3.5 mm combo audio jack. There does not appear to be a USB Type-C port or an SD card reader though.

The FX505DU comes with a Realtek RTL8822BE WLAN module which, while not as fast as Intel’s offerings, offers respectable speeds. It also comes with Bluetooth 4.2 instead of the newer 5.0 standard.

Getting into the laptop is relatively easy. By just removing 11 screws from the bottom panel and popping it off, one gets access to the 2x SODIMM slots, one of which is empty and available for upgrade, one 2.5 inch drive bay and one M.2 Storage slot. Accessing the WLAN module requires you to remove the M.2 storage drive though.

Keyboard – The keyboard on the FX505DU is essentially the same as that on the previous FX505DY model, with the addition of single-zone RGB backlighting. The keys have a decent amount of travel and don’t feel mushy. The tactile feedback is not as satisfying though. Still, typing long documents on this laptop won’t be much of a problem. The keyboard has a numpad which, along with the arrow keys, can feel a bit too small and cramped to use.

Touchpad – The touchpad comes with Windows Precision drivers and is of a click-pad style, meaning you can click down anywhere. It is of a decent size though the surface is not well suited for precision cursor control.

The FX505DU is one of the cheapest laptops to come with a 120Hz refresh rate IPS-level display with a native resolution of 1920×1080. This is a huge selling point for people who want to play fast paced competitive titles like Counter-Strike or Overwatch as higher refresh rates are proven to improve reaction times. Even outside of games, doing regular tasks like moving the cursor or dragging windows feels extra smooth. The colour accuracy though, leaves a lot to be desired. The display only covers 45% of the NTSC colour space. This means that the laptop is ill-suited for colour-sensitive work like photo and video editing.

Peak brightness is around 275 nits, though this can vary depending upon the panel used on the particular model, making sunlight-legibility difficult.

While on battery, the display reverts to a 48Hz refresh rate to increase battery life.

The Ryzen 7 3550H is a 4-core/8-thread processor which competes with Intel’s i5 lineup. The laptop is also available with a Ryzen 5 3550H processor which has slower clock speeds. The chip offers commendable performance, though it is not as powerful as Intel’s options particularly in single-threaded applications. The chip scores 4149 in the single-core and 13654 in the multi-core Geekbench V4 benchmarks.

The Nvidia Geforce GTX 1660 Ti GPU is powerful enough to run almost all titles at 60+ FPS at native resolution with high-ultra settings. What’s good is that, one can achieve 120+ FPS in e-sports titles with high settings and medium settings in AAA titles allowing the user to make full use of the 120Hz display.

While comparing with older laptops with the same GPU though, this laptop kind of underperforms. This is largely in part due to the lower performance of the Ryzen 7 processor which becomes evident at low settings, where games become more CPU bound.

The heat dissipation is adequate for the laptop, though the fan noise tends to pulse while under load which makes it more annoying than a constant noise.

This particular configuration has a 512 GB NVMe Intel SSD. The laptop has an empty 2.5 inch drive bay which can be used to expand the storage. Other configurations include a 1TB/128GB hybrid configuration and a 1TB SSD configuration. Read/write speeds are upto NVMe standards and load times for games are very fast.

The FX505DU comes with dual bottom firing speakers which provide for a decent experience. They are good enough for understanding dialogue in movies and games but overall, sound quite “tinny” and lack bass. There is also a high amount of “pink noise” at the maximum volume which can hamper user experience. It is recommended to use headphones while gaming as the fan noise can drown out the audio from the speakers at times.

The FX505DU has a 48Wh battery, which is on the smaller side, especially for a gaming laptop. There is no fast-charging support and battery life can last upto 4 hours on light tasks. Gaming while on battery causes the battery to drain fast and it limits the performance as well. 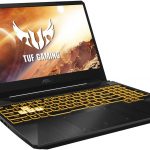