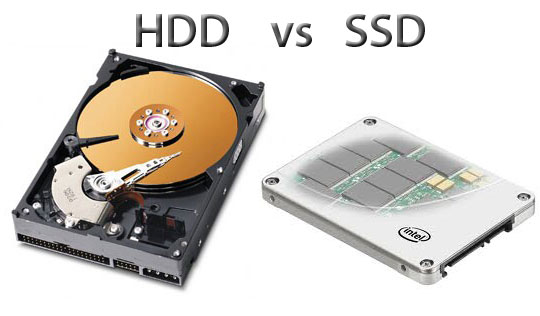 If you are about to buy a laptop in the near future, the question that comes to your mind after processors is the type of storage that you need. Recently released laptops have a solid-state drive(SSD) as the primary boot device. Most of the bulky gaming laptops and prebuilt PCs also have moved to SSDs, except a few cheap models. In some cases, a desktop comes with both, with the SSD as boot drive and HDD as a bigger capacity storage-supplement.

But, if you need to choose between SSD and HDD, what factors you should take care of? In this article, we will help you decide what is the best option for you by comparing them and looking at their advantages and disadvantages.

Before we get into comparing the two drives, let’s take a quick look at each type of drive.

What is a Hard Disk Drive (HDD)?

In cas you have an old PC or laptop, it will most likely have a HDD on which all the files, folders, applications and the operating system are installed.

A traditional hard drive contains a circular disc which is known as a platter which has the basic functioning of storing data. This disc spins, and as a result reads or writes data using the read-write arm of the platter. The speed of the spin of platter decides how quickly an application can open and how your operating system responds.

Two types of connections, IDE and SATA is prevalent in hard drives. Old systems have IDE port to connect to motherboard of PC, whereas the new PCs or laptops have a SATA connection which is faster than IDE. The latest technology is SATA III which helps in fastest transferring of data in HDDs.

What is a Solid State Drive (SSD)?

The solid state drive or SSD, is a relatively newer storage technology but it’s been around for a while now. If you have bought a modern laptop, it is very likely that it has a SSd installed in it.

Solid state drives, as the name suggests, is a solid(fixed) storage device with no moving parts. Instead, it uses flash NAND memory. NAND’s meaning is Negative-AND and it basically is a memory chip made up of semiconductors. Higher the number of these memory chips, higher is the memory capacity. Modern technologies allow more chips to be installed, and hence the capacity of SSDs can be increased manifolds.

There are many connection technologies for SSD- starting with SATA III, it includes PCle, M.2 and NVMe. PCle ports are in the motherboard area and can be used to install SSDs. The most common technology is M.2; if your laptop is using SSD, it is very likely that it is installed into the M.2 port. NVMe(Non-Volatile Memory Express) is the newest SSD technology and the data transfer speeds on offer is incredibly high.

The first thing that anyone thinks of while buying an SSD or HDD is the price. Due to high performance and data transfer speeds, the price of SSD is significantly higher than the price if an HDD. However, the price of SATA SSDs is lower than PCle and M.2 SSDs. Prices of certain SATA III SSDs are almost equal to that of a traditional HDD.

Check out our best external SSDs for laptops guide to pick out the best one for yourselves.

Talking of HDDs, if you want to store a large amount of data at a low price then you should definitely go for HDD. HDDs are relatively cheap to manufacture, so they are more affordable. However, data protection is a big concern in HDDs in case of damages.

Check out our best budget external HDDs guide to pick up the best one for yourselves.

After price, the most important factor to look for while buying an SSD or an HDD is the capacity of the device. Generally, if you want large spaces, HDD is the way to go.

HDD capacities range from a few GBs to 15TB, while there are even higher capacities available for commercial use. The most commonly used specifications are 1TB and 2TB which is available at a very affordable price. Also, if you need lots and lots of space to store your data, I would recommend you to keep your data divided into several small capacity HDDs. The reason is that you won’t lose your data at once.

A few years earlier, the capacity of SSDs was a major drawback. But, with advanced technologies, SSD also now offers space in the range of terabytes. The only problem is that you have to pay a lot of money on this.

The best solution for this is to install your operating system on a 256GB SSD and then store all your important files, folders, movies and games on a 1TB or a 2TB HDD.

When we are comparing SSDs and HDDs, the speed is the factor where there is a large difference and you might be able to decide from here on that what you actually need- SSD or HDD?

We saw above that an HDD works on a spinning platter. So, the speed of an HDD largely depends on the RPM(revolutions per minute) the device is capable of- higher the RPM, higher is the speed. The minimum RPM on offer is 5400 RPM but at a good budget, you can get 7200RPM HDD. Devices with RPM greater than 10,000 are also available, but they are very rare and expensive. So, the average speed of a SATA III HDD at 5400RPM is 100MB/s and at 7200 RPM is 150MB/s.

SSDs offer almost 10 times the speed HDDs offer. So, taking into consideration the speed and performance, you should definitely go for an SSD.

SSD vs HDD: Other Factors

There are some other factors also which one should consider while choosing between an HDD or an SSD. Firstly, an SSD has low power consumption. So, if you use a laptop, SSD might help you in saving power. But, it depends on the type of SSD you use.

Secondly, since SSDs don’t have any moving parts, so they are more robust and portable, and it makes them a better choice for most laptops and other mobile devices.

So, what is best for you- an SSD or an HDD? While SSDs are more efficient and robust, HDDs are cheap and provide a lot of space.

As mentioned earlier, the best solution is to get a small-capacity SSD to install your OS and then get an average capacity HDD to store all your important data. One more option is to get an SSHD- a device that mixes up all the good features of an HDD and an SSD, and are worth considering. The choice is yours!